Without fail, the financial markets teach us lessons every year, but it is up to investors to learn. In 2017, the overwhelming lesson was a rerun: short term predictions are worthless (at best) and dangerous (at worst).

We ran across a great example of predictions in Bob Seawright’s 2018 Investment Outlook. Seawright is Chief Investment Officer for Madison Avenue Securities and recently wrote the astoundingly comprehensive and rational recap/outlook for all financial, economic and newsworthy topics of the past year. I encourage you to read it here.

Seawright compiled some of the industry’s most respected analysts’ S&P 500 predictions from a year ago and compared their guesses to reality. 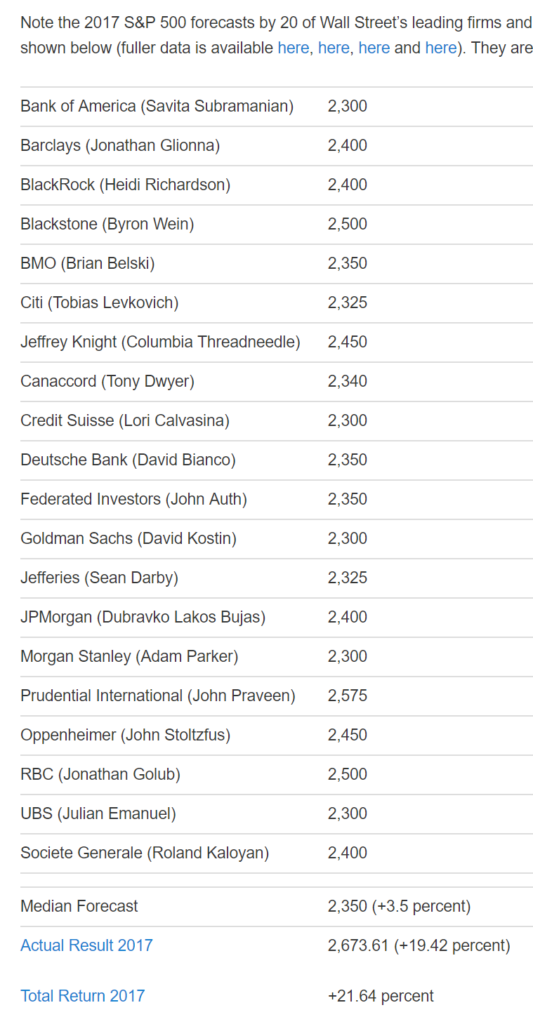 The median analyst forecast for 2017 was a perfectly conceivable +3.5%. At the time, the S&P 500 had already gained 7.3% since the election. These analysts (ourselves included) believed the market had increased all that it deserved. Of course, the actual return for the S&P 500 was +19.42%.

The predictions from longer term thinkers were equally pessimistic. In January of 2017, Morningstar’s Christine Benz surveyed well known investment managers and firms for similar, but longer term predictions. Their 7 to 10 year forecasts ranged from -3% to +4% with most around +1 to +2%. While none of the prognosticators made guesses about the next 12 months, I’m guessing they have been surprised with the results for the past 12 months.

Even Nobel prize-winning Economist Richard Thaler was surprised. In an October 2017 interview, Thaler remarked that Donald Trump’s “certainty” was far greater than his “knowledge.” Ironically, Thaler followed up that comment with some misplaced certainty of his own. Thaler said he was surprised the market continued to go up and couldn’t fathom the reasoning behind it. One thing was certain though, he said it wasn’t because of some big tax cut bill on the horizon. Of course, in the three months following Thaler’s comments, the S&P 500 gained another 10% and the biggest tax reform in 30 years passed.

As we wrote about in our last Market Commentary, if we all could have read this year’s headlines (without knowing how investments would perform) it would have been very difficult to stay invested. But that’s exactly the strategy the market rewarded: staying invested.

Our approach to investing is that every investor should hold a portfolio that could reasonably time travel to any year (for example, go forward 20 years or back 20 years) and have an appropriate (but not necessarily optimal) expected amount of risk and reward.

Said another way, if our 50 year-old client today were transported forward or backward in time (with risk tolerance and asset allocation still intact), would their portfolio still be reasonable, even if it wasn’t optimal? 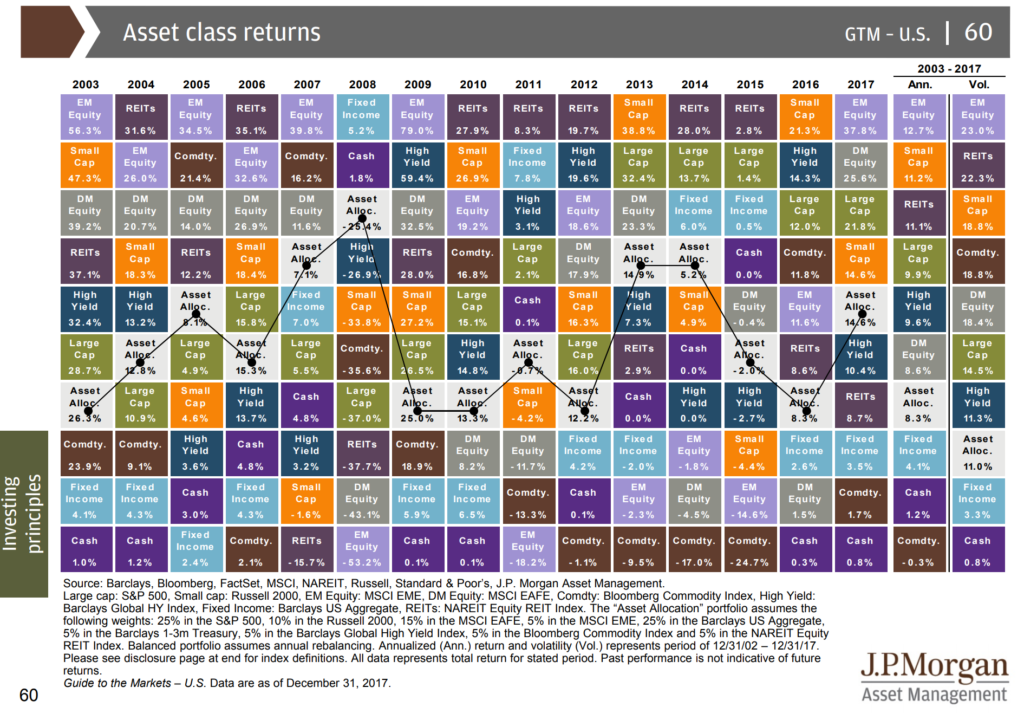 To drill down further, let’s say that we think Emerging Market (EM) Equities are the best and almost the only asset class today with meaningful expected returns. For a moderate risk client we might wish to own 30% in EM Equities, but we would have to justify that by comparing it to a long term view of the chart above. If our client time traveled back to 2009 with 30% EM Equities would they be happy? Certainly; the 79% returns would be hailed as spectacular. But would that same client be happy if the flux capacitor shorted and sent them instead back to 2008? Probably not; EM Equities were down -53% (see chart above).

Our “time travel to any year” model permits the flexibility to be overweight areas of meaningful potential return-for-risk (and similarly underweight in areas of lower expected return-for-risk), and it is tight enough to still heed investment history and remain invested in years like 2017 when the analysts’ estimates were bleak.

With so many unknowns, we should highlight three investments we’ve seen payoff wildly this year and we’re certain they will continue to do so regardless of the market’s P/E ratio, tax legislation, or the Fed’s interest rate policy. Of course, critics may claim these aren’t really investments. But we’ve sat across the table from enough people to know that these “tips” are often worth far more than anything one could buy in a portfolio.

1. Giving the Gift of Giving

We recently had the privilege of facilitating a family meeting for a client couple and their grown children. The couple wanted to share who and what informed their views on work, family, charity and money (as our blog title suggests “It’s More Than Money”). In that meeting, the couple was able to bless, encourage, and empower their kids in a unique way.

Not surprisingly for us, the most meaningful part (for all involved) was when the parents gave each of the offspring families a sizeable “portion” of the parents’ Donor Advised Fund to direct for whatever charitable interests the kids wanted. As everyone started talking about their passions and plans for giving the money away, I got goosebumps. Being a part of that conversation will go down as one of my top 5 favorite moments helping clients. Even more, I’m sure those dollars are some of the most fulfilling dollars this family has ever “spent”.

2. Locking in a Meaningful Return

If stocks and bonds are both historically expensive should we look outside of the market for some of our return? In August we wrote about this idea of “opportunity cost” in our post “What Should I Do With My Next $_____?” Opportunity Cost recognizes that for every dollar someone invests in the market, they are foregoing an investment return elsewhere. For most people’s dollars, the stock and bond markets have been and will continue to be good choices. But for some people and/or some people’s dollars, it isn’t the best choice. And as a fee-only fiduciary we have the obligation and the privilege to explore that with them.

Recently a client told us about an investment opportunity with a family member. Even though Jonathan was his optimistic self, the client probably saw doubt on my face. And for good reason; most of our clients’ investments with friends and family members have a limited upside of “An Awkward Thanksgiving Dinner” and a very real downside of “Broken Relationships with a Side of Lawsuits.”

Even though I had my doubts, we offered to look at the business plan. I was so pleased to be proven wrong. The proposal was far more in depth, thought out, and sophisticated than almost any business plan we have seen. We brought in a trusted attorney and helped come up with an agreement that allowed the client to earn a respectable return while using their dollars in a meaningful way.

Of course, we have to be careful with opportunity cost. The same logic that leads people to want to pay off debt can be stretched to justify a purchase of Bitcoin or rarely used vacation home. The business loan I mentioned above only works because we viewed it in the context of our client’s entire financial plan, planned for all known contingencies, and the client was comfortable taking on the risks.

3. Doing What Needs to Be Done

Our final “can’t miss” investment is to simply do what needs to be done. This might look like finally realizing a dream…or delaying one that isn’t feasible. For some people, this could mean bumping up their savings rate or finally getting around to finalizing their will. For others it could mean coming to an agreement with an adult child to help them leave the nest or spouses having an open, honest conversation about their spending habits.

Sometimes “what needs to be done” is to enjoy hard-earned dollars…and it just takes an extra nudge. We have a client couple who were unusually diligent savers their whole lives. The wife told us she wouldn’t let the husband get a new toothbrush because she knew he would get a new one for free at the dentist in a couple of months. I thought she was joking…she wasn’t.

They came to us entering retirement and they continued their thrifty ways. Even though they had more than adequate savings and a pension, it was difficult for them to justify two things they always wanted: to give money to charity and travel more. After walking through a number of worst case financial planning scenarios, we wrote them a prescription to spend considerably more money on travel and charitable causes. They thought we were joking…we weren’t. Since then, we have helped them open a Donor Advised Fund and they send us a postcard from every travel destination; most include the message “Thanks for making us spend our money!” 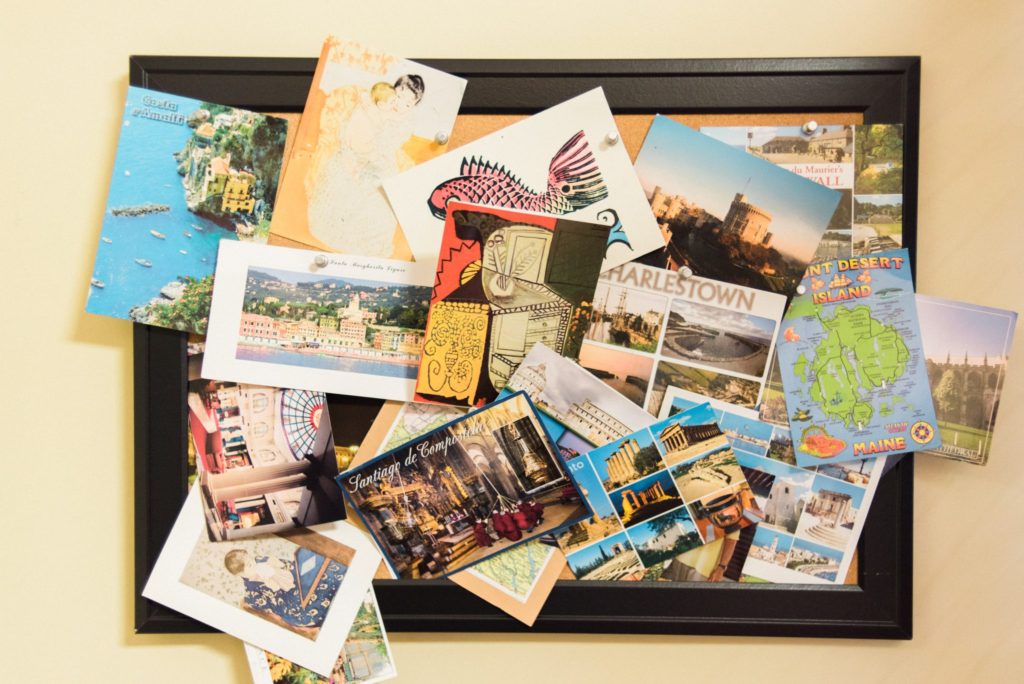 Things That Matter & Things You Can Control

We’ve mentioned it before, but it is worth repeating. Years ago we purchased a napkin sketch by Carl Richards that Jonathan and I both keep within reach: 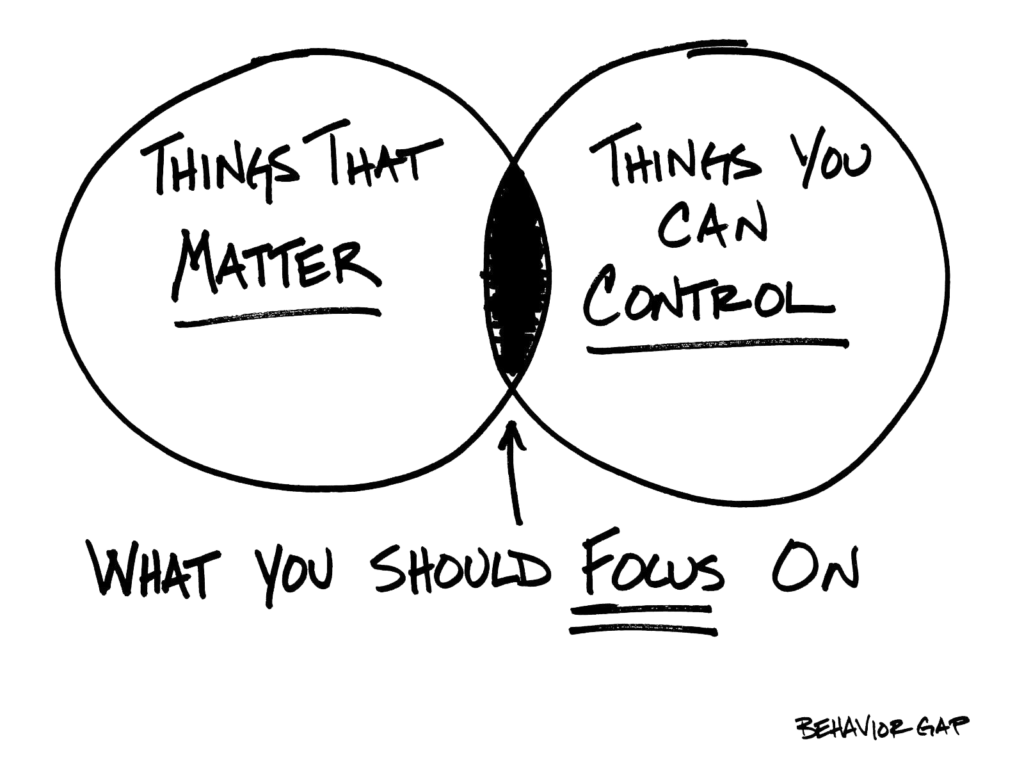 Market recaps and forecasts matter. However, while we control the specific asset allocation, the end result of how each asset performs is out of everyone’s control. Alternatively, our “3 Can’t Miss Investments” (inspiring giving, considering all investment options, and doing what needs to be done) ALL matter, are all within our control and should be part of our primary focus. .