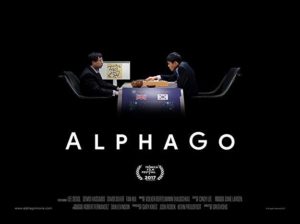 I’m a sucker for board games and Netflix documentaries, so when I stumbled on AlphaGo, I was sucked in. It chronicles the story of how a research group, DeepMind, developed an Artificial Intelligence (AI) based computer program (AlphaGo) so advanced it took on the best players in the world and turned the conventional wisdom of billions of Go players over the last 3,000 years on its head.

It also made me consider the role of risk and return on a financial plan. Below we’ll walk through a sample retirement scenario and explore the impact of three different investment strategies on “winning the retirement game”.

Having the Most Points or Having More Points?

On the surface, Go is a simple board game. But as DeepMind points out, there are more board configurations of Go than there are atoms in the known universe (which is why it is the Holy Grail for AI researchers). Complexities aside, the basic game involves black and white stones on a 19”x19” grid. Player A places their stones in hopes of surrounding and (thus capturing and removing) Player B’s stones. The player with more stones wins.

This is worth repeating: “The player with more stones wins.”

And for the last 3,000 years, this defined how players approached Go. They executed strategies to amass the maximum stones possible. This would seem like a good strategy in any game. Want to win a basketball game? Scoring 150 points will usually do the trick. On the surface this also seems like a good strategy in investing. Want to have a comfortable retirement? Having a portfolio 50 times your paycheck seems like it would be hard to mess up ($100,000 income x 50 = $5 million) a comfortable retirement, right?

The most surprising development was AlphaGo “learned” (on its own) that it didn’t need a massive amount of points to win. Instead, AlphaGo executed plays that practically assured that it would have at least 1 more point than its opponent. As a result, AlphaGo made unorthodox moves. So much so, that at one point, in the middle of a live match against the best Go player in the world in front of 200 million viewers, the programmers thought AlphaGo was broken. In a breakthrough discovery, Go experts saw that AlphaGo played to increase its probability of winning instead of aiming to scoop up as many points as possible.

Taking this concept to a game I actually understand, Dean Smith’s basketball teams perfected this “Win by 1” strategy with the Four Corners offense in the early 1960s. For nearly 20 years, whenever his Tarheels had a decent lead, Coach Smith shifted to a game of “keep away,” only taking a shot if it would produce near guaranteed points. In 1982 (with no shot clock in place) Coach Smith’s team held the ball for the last seven minutes of the ACC championship game, eventually winning 47-45. The next year the Atlantic Coast Conference introduced the shot clock (and the three point line) and that was the end of the Four Corners offense.

What Does “Winning By 1” Mean in Investing?

We’ve heard more than once in a client meeting: “I want my last check to the IRS to bounce.” It’s a good one-liner and might even sound like a great strategy to you. Enjoy your money while you’re living and run out the day after you die. It’s like coasting 5 miles to the nearest gas station when your fuel gauge says 0 miles to empty.  You made it, but those last 5 miles were not easy. That’s not “Winning By 1”…in fact, that’s not winning at all.

Dean “coasting into the gas station” at 91 would not be a “Winning by 1” strategy. Rather, “winning by 1” would involve a carefully crafted (and regularly updated) financial plan that ensures the highest probability of success and therefore leaving plenty (but not “too many”) of dollars in the tank.

Just like Coach Smith, our “Dean” could easily (and maybe unknowingly) risk losing the game by trying to score too many (or too few) points. When we input all of Dean’s information into our financial planning model, we see the impact of different investment approaches on his probability of success, his Safety Margin (the money left over, in today’s dollars, at age 91) and the potential volatility along the way. Let’s look at three simplified hypothetical portfolios: Hold The Ball (Ultra Conservative), Balanced, and Shoot Only 3s (Ultra Aggressive).

Our Hold The Ball ultra conservative portfolio is made up of 10% Cash, 77% Bonds, and 13% Stocks. We’ve projected a 3.79% Total Return, which is a 1.29% Real Return once we factor in a 2.5% inflation rate. Dean will likely experience minimal volatility, over time, evidenced by an expected standard deviation of 4.07%. In real terms, during the Great Recession (November 2007 – February 2009) a Hold The Ball portfolio would have earned +6% and during the Bond Bear Market (July 1979 – February 1980) this portfolio would have returned -4%.

This might sound fine until we we look at the impact on Dean’s financial plan. With his life expectancy and the goals mentioned above, Dean would only have a 66% probability of success (the probability of achieving all of his needs, wants and wishes). Furthermore, this ultra conservative approach would likely leave Dean with $0 Safety Margin at the end of his life, the equivalent of coasting into the gas station on fumes.

Our Shoot Only 3s ultra aggressive portfolio is made up of 0% Cash, 0% Bonds, and 100% Stocks. We’ve projected a 7.66% Total Return (5.16% above inflation). When we put this portfolio into Dean’s plan, his expected Safety Margin zooms to $1.3mm. He is projected to make it to 91 with the equivalent of $1.3 million in today’s dollars left in the tank.

While this could seem like a no-brainer, the problem lies along Dean’s path to age 91. The Shoot Only 3s portfolio will likely experience five times the volatility of the Hold the Ball portfolio, as measured by its 20.44% standard deviation. In real terms, Dean would have earned a +15% return during a Bond Bear Market, but if he opened his statement during the Great Recession, he would have seen a -51% return! Because the range of outcomes is so wide (due to the volatility of his portfolio), Dean’s probability of success is only 77%. Dean opens himself up to potential outcomes that could jeopardize his needs, wants and wishes.

Want an example of this in real life? Look no further than Game 7 of the 2018 Western Conference Finals. The Houston Rockets, who normally shot 36% from 3 point land, lost the most important game of their season because of an 0-27 streak from behind the arch (an outcome that was statistically nearly impossible).

A “Balanced” Game Likely Wins and Is Easier on the Stomach

Finally, our Balanced portfolio is made up of 4% Cash, 35% Bonds, and 61% Stocks. We’ve projected a 5.81% Total Return, 3.31% above inflation. While it isn’t as smooth as our Hold The Ball portfolio, the Balanced portfolio should experience 40% less variability than “Shoot Only 3s”. With an expected Standard deviation of 12.09%, a Great Recession Return would have likely been -26% with a Bond Bear Market Return of +6%.

In the context of Dean’s plan, our model (using the Balanced portfolio) projects a Safety Margin at age 91 of $624,254 in today’s dollars. This approach would likely result in enough investment return to achieve his goals without the volatility that could subject them to jeopardy (or lose him sleep). The Balanced portfolio, in Dean’s example, results in an 82% probability of success, within our range of comfort. It is worth noting that the “Hold the Ball” and “Shoot Only 3s” might be the exact right fit portfolios for someone; just likely not Dean.

Play the Game You Want And Adjust Your Goals

In Dean’s example, we kept the goals constant and only changed the investment portfolios. But what if Dean wants to “Hold The Ball” and doesn’t want to take on as much risk as the Balanced approach projects? He could do that, but he would need to change his definition of winning. We would remind Dean that he has a number of variables, or levers, within his control as seen in the screenshot below from our planning model: Retirement Age, Retirement Living Expense, Travel, College Funding, and Gifts to Charity, all having their own inflation rates (and time periods) and thus impacting his plan in different magnitudes. 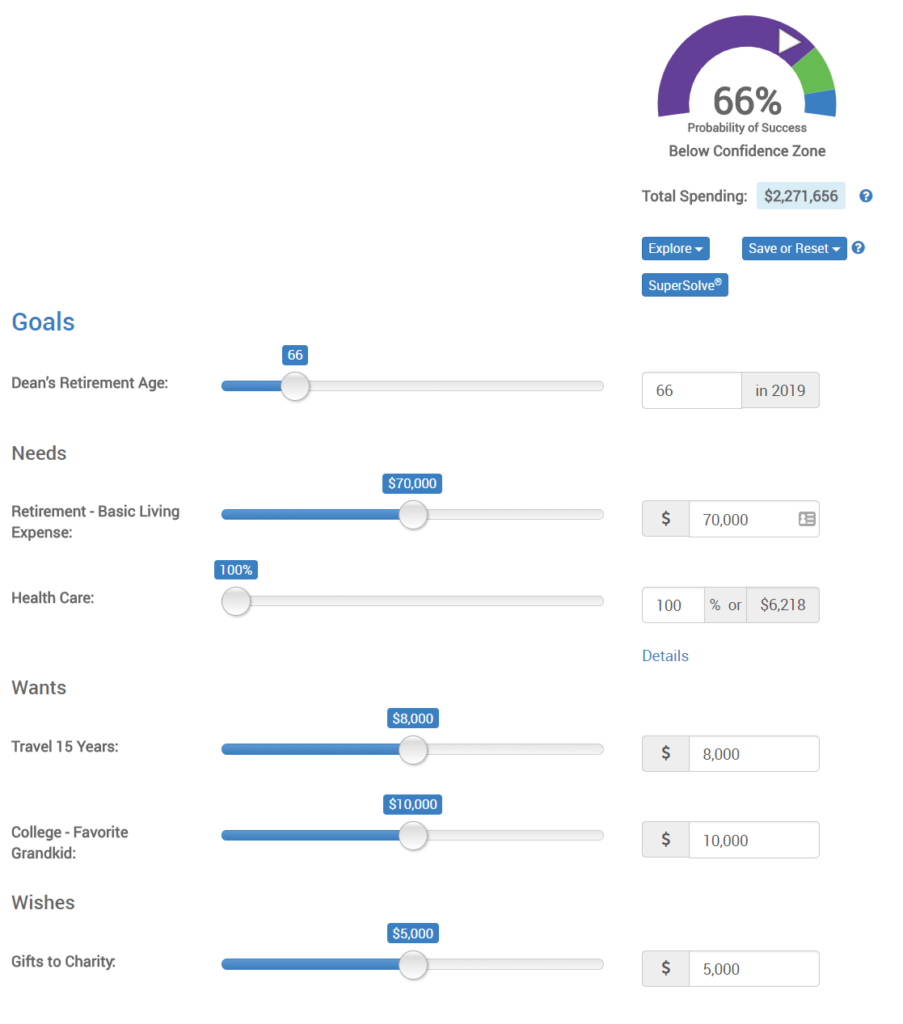 For example, since the majority of Dean’s retirement income will come from a pension and social security, a small change in Retirement Living Expense over the next 25 years from $70k per year to just $65k would give him a more comfortable probability of success (increasing from 66% to 84%). Of course, if he is concerned about living past 91, his Safety Margin might be lower than he is comfortable with ($224,000 in today’s dollars). While we wouldn’t call this coasting into the gas station on fumes, any years beyond 91 would be close.

“Winning the Retirement Game” in an Uncertain World

Often after reviewing a client’s financial plan, we’ll quip that their plan will be out of date by the time they reach their parked car. While this isn’t literally true, it does speak to life’s constantly changing nature. We make best efforts in planning for all eventualities, processing multiple scenarios at once: health events, bad timing in the market, having to retire “today” rather than in 2 or 3 years as hoped, dying sooner than expected, living longer…the list goes on and life changes. What gives us (and those we love serving) some certainty in an uncertain world is our unwavering focus on increasing the their probabilities of success. Healthy, financial margin in an uncertain world is the result of following a living, breathing planning process that adjusts and recalibrates as needs, wants, wishes and all of life’s changing inputs present themselves. We can’t know the future, but we can keep planning for it.