In short, yes. But don’t take our word for it: as seen in their 2017 annual report, the Social Security and Medicare Board of Trustees “project that the combined trust funds will be depleted in 2034“. However, the Social Security Administration and Congress have a few “levers” they can pull to extend this 2034 date and continue paying benefits.

The idea of social security has been around for thousands of years. It started with guilds and poor houses caring for their aged and has slowly transformed into the system we know today. America’s Social Security grew from dire circumstances in 1935, in the midst of the great depression. The system provided citizens with enough bread to make it through the week, but it has grown into playing a much bigger role than originally expected.

In 1935, Social Security began with a FRA (Full Retirement Age) of 65, based solely on the standard railroad pension retirement age. Then, the average American only lived 14 years past age 65. However today the average American lives 20 years past age 65. With cost of goods rising and people living longer today than ever before, Social Security’s expenses are exceeding their income.

Why Is Social Security Going Bankrupt?

Social Security has been operating under a massive cash deficit since The Great Recession, illustrated below. In order to avoid the looming $174 billion deficit year in 2025, and eventual bankruptcy in 2034, the system needs to change. 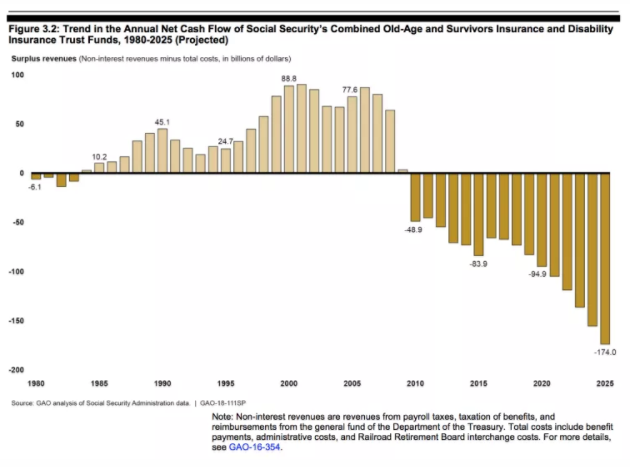 We’re faced with this deficit because living past 65 is astronomically expensive! Social Security provides an average benefit of $16,000 per year to over 61 million families…or 976 billion dollars every year! Making it worse, that 61 million number is growing with a quickly retiring baby boomer generation.

Not only is the number of people receiving a benefit expanding the average annual benefit amount is also increasing. The rise in benefits is due to prices going up nationwide, most commonly referred to as inflation. These adjustments for Social Security are referred to as COLA (cost of living adjustment). This years COLA adjustment of 2.0% is a pleasing sight compared to the last 2 years. However, for many recipients, the increase will almost all be offset by medicare costs. 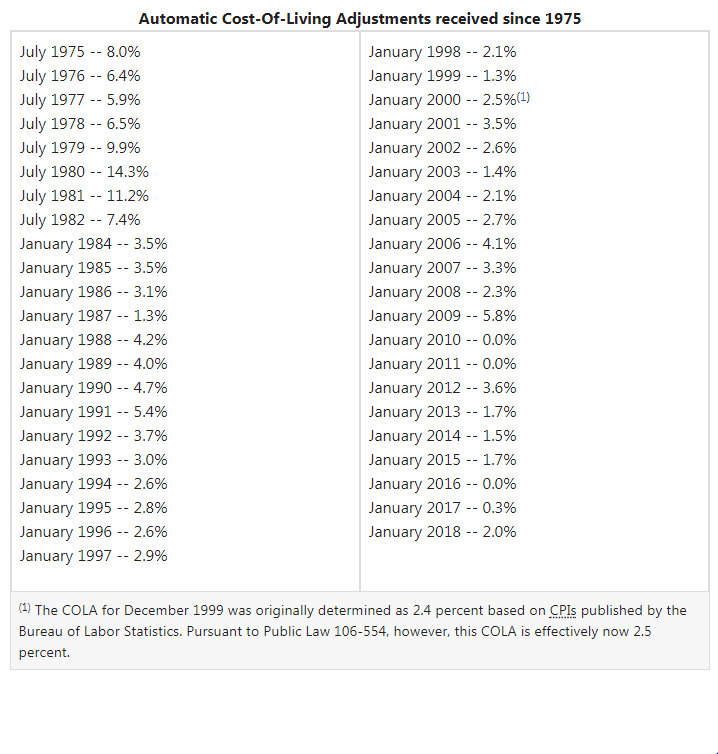 How Do We Fix The Problem? 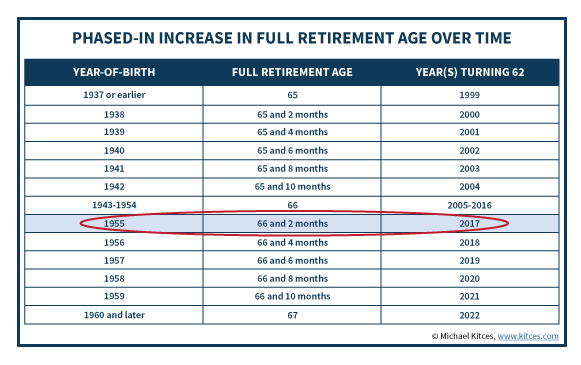 While these sort of changes seem hard to fathom, the Social Security Administration and Congress have made tough calls in the past to ensure the future viability. For example, in 1983, when the program was operating at a deficit (as you can see in the first graphic), they bumped FRA from age 65 to age 66 which caused a positive cash flow for the next 30 years!

For now, all we know is what Social Security will do next year (raise the ATMA to $128,700 and begin raising the FRA to age 67 over a 6 year period.) These “improvements” (which are really a tax of sorts) are projected to delay the bankruptcy an additional 15-25 years (until 2050-2060). While we don’t know how or if Social Security will get a permanent fix, I believe that for current and imminent retirees their benefits are secure. For those of us expecting to receive benefits in the next 30-40 years we would suggest not counting on much (if any) future benefit and being pleasantly surprised if they stay intact.

Financial Planner at Smith Partners Wealth Management
Stephen has been investing for over 10 years and has always had a passion for helping others understand money and teaching them how their hard earned assets can be leveraged to meet their financial goals. Stephen has understood how wealth management and financial planning can change lives ever since he was in his teenage years thanks to his parents ensuring he was well versed in the topic. Within this realization, he discovered his purpose: making a positive difference in the lives he is surrounded by and the financial industry he works in.