It’s hard to go anywhere in our city in December without the conversation turning to the Lighted Christmas Balls, the Food Drive and the Running of the Balls. If you’ve lived in Greensboro twenty-one years or less, you’ve never known a December without Lighted Christmas Balls. In 1996, our daughter, Alison, came home from college on Winter break. Bubbling with excitement, she described seeing chicken wire spheres hanging from Dogwood trees at the home of one of her Young Life campaigner girls in Raleigh. “We can make these Daddy!” The first three ball creations, wrapped in mini lights, were about the size of cantaloupes and adorned the lowest branch in the smallest tree complete with extension cords streaming from the downstairs bathroom window.

The next year our son Justin had the idea to make them larger and to use his potato gun to shoot the line to the top of the trees in our yard. If you’ve never heard potato cannons exploding in December darkness you must add it to your bucket list. A loud “KERBLAM” accompanied by a orange-yellow flame from the barrel and within seconds, a soft “thunk” of a lemon falling into leaves is one our favorite sights and sounds of Christmas. This really made the neighbors want to join in the fun. The neighbors on the corner of Madison and Ridgeway joined in the next year and it spread down Ridgeway Drive like magic. We started to have workshops to teach neighbors and friends how to make the balls and house by house and yard by yard Sunset Hills was soon known as the neighborhood with the balls of light. Cars streamed into the neighborhood and traffic was bumper to bumper and strangers started dropping off fruit cakes, wine, thank you notes, and fudge to thank us for the lights.

Something important happened in 2007 that forever changed the course of the Lighted Christmas Balls. Our friend Marlene suggested we start a food drive and “Shine the Light on Hunger” was born. As of today, 93,728 pounds of canned food has been placed in the little trailers in front yards all around the neighborhood. The next great idea came from our friend Nick Loflin in 2012. “How about we put on a a 5k at night through the neighborhood?” he asked. He proposed it to the neighborhood association and the GPD; both were exuberant. The total funds raised in the “Shine the Light on Hunger” campaign since inception is $322,932. The run is responsible for $251,000 of that total. Due to the careful work and oversight of the funds by the Second Harvest Food Bank and the partner agencies (like Greensboro Urban Ministry) that money provided approximately 2,307,385 meals to the hungry in our area. 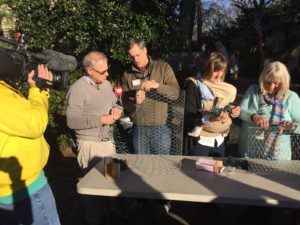 To read more, you could see the News and Record which has featured Lighted Christmas Balls since day one. Made in Greensboro, 1808 Greensboro’s Magazine, Action Greensboro, TEDxGreensboro and O. Henry Magazine have each captured a unique perspective of the Lighted Christmas Balls. The Today Show attended our 2015 workshop and filmed an interview. The Running of the Balls 5K and popular social media channels like YouTube, Instagram, Facebook and Twitter have propelled the balls city-wide and beyond.

While the Lighted Christmas Balls are almost impossible to photograph, once you have walked or driven through the neighborhood, you are almost certain to return and bring a friend. Thanks Greensboro for making this idea 1,000 times better than anyone could have imagined.

Jonathan listens for what’s important, looks for what hinders success and comes up with techniques to remove threats to sustainability. He likes to say that sculptors do something similar; they start with a block of granite, take away what isn’t supposed to be there and presently the statue comes into view. Anne joined Smith Partners Wealth Management in 1988 just to help out with whatever the company needed but predictably, soon she became interested in our clients and how she could be part of the team to help them.

Latest posts by Jonathan and Anne Smith (see all)