We just completed Science Fair season in our house – whew! Finley (age 12) tested different ratios of Corn Syrup to Sugar to determine the optimal recipe for homemade marshmallows (I take all the credit for the title: “Who Wants S’more Marshmallows?”) Going into the project, she had no idea which recipe would make the tastiest, meltiest, and squishiest marshmallow. And we quickly discovered that it is really easy to mess up a simple marshmallow recipe.

The Federal Reserve is a bit like a living, breathing science experiment. It has a “Dual Mandate” to keep inflation and unemployment at long term sustainable levels. But, like our marshmallows, this is a precarious “ratio” to manage. In terms of variables, the Fed can buy and sell securities, change the prevailing interest rate, and alter the deposit requirement for banks. Through these tools, the Fed’s never-ending hypothesis is that it can keep inflation at approximately 2% and unemployment around 4%.

There are plenty of factors far outside of the Fed’s control. In the last two years, we’ve experienced a shock to the workforce, fiscal stimulus, housing appreciation, supply chain shortages and a developing war to name just a handful. That’s equivalent to Finley and me trying to make her marshmallows while her siblings fiddle with the stovetop knobs when our backs are turned.

So it is no surprise that our current economic “recipe” tastes a bit off (like our marshmallows that Grayson and Millie tested, above.) The chart below was originally produced by the Federal Reserve Bank of Chicago in August of 2020 on the heels of COVID. It shows the balancing act of the Fed’s Dual Mandate when inflation was a low 1% and unemployment was around 11.5% (labeled “8/20/20 Actual”.) The green dots were the Fed’s hopeful path back to the target by year-end 2020, 2021, and 2022. The current inflation rate is literally off the charts. I had to draw it over the Fed’s preceding paragraph (labeled “4/10/22 Actual”.)

The Fed has already implemented a 0.25% rate hike and signaled further interest rate hikes throughout the year. As we can see in the chart below, no one should be surprised to see rates climb higher (the blue line is Fed estimates, the green line is market estimates.)

We see these expectations playing out in actual bond returns year to date. In the chart below, the righthand section shows the projected (hypothetical) price decrease if we experienced a 1% increase in interest rates. For example, if interest rates rise 1% tomorrow, we could expect a -1.9% decrease in 2 Year US Treasury prices. On the left, we can see what has happened to bond prices (2022 YTD Return.) Even though actual rate hikes have only been +0.25%, we’ve already seen a -2.54% decline in 2 Year US Treasuries. In other words, expected future rate hikes are likely already priced into bonds. What isn’t priced in are the unexpected potential rate hikes that could occur above the green and blue lines above.

We’ve talked about inflation for the last two years in specific (and what felt like temporary) areas such as housing, cars, and microchips. Today we’re faced with additional continued and dramatic inflation in energy, food, and shelter. This puts considerable pressure on US consumers, businesses, investors, and decision-makers (such as Congress, the President, and the Federal Reserve.)

To put it in historical context, the chart below shows year over year inflation for the last 50 years. It is hard to find a period of high inflation that didn’t have a recession nearby (before or after.). 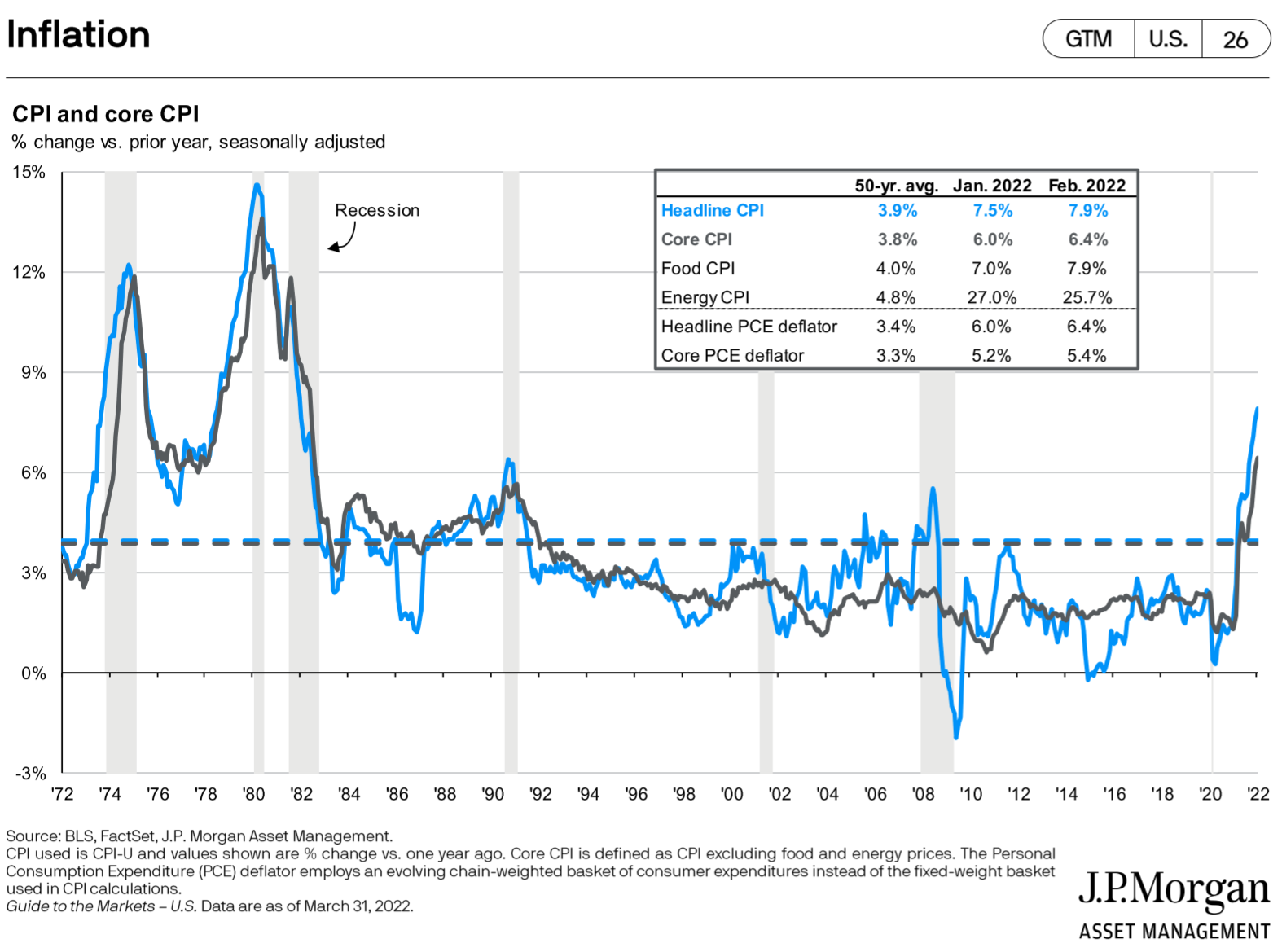 Inflation isn’t limited to just the United States. Carmen Reinhart, the World Bank’s Chief Economist, points out that “the share of advanced economies with inflation rates above 5 percent or higher has climbed from zero a year ago to almost 60 percent in February 2022, even before the Russia-Ukraine disruptions filter fully through.”

Possibly the most surprising aspect of the War in Ukraine is the resilience of the global markets. For all of the “bad news” above, the markets are largely unaffected. In the Financial Times’ recent article “War in Ukraine: What Explains the Calm in Global Markets?” the authors paint a picture of contained immediate economic impact, but warn of the possibility of contagion. Again Reinhart says, “Do not underestimate the cumulative toll of spillovers just because they don’t have headline drama.”

If the above sounds like a less-than-hopeful view of the economy; that could actually be a good thing for stocks. The University of Michigan’s Consumer Sentiment Index is a measure of how Americans feel about various facets of the economy. It covers inflation, disposable income, employment prospects, and investing. All of the data is compiled to produce a number. Below, we can see the gyration in sentiment with the blue dots marking turning points (highs and lows.)

Counterintuitively, when Americans rank highest on the sentiment index, the ensuing 12-month returns are far below historical averages (with February 2020 as the exception.) The opposite is also true. When Americans feel worst about the economy, future 12-month returns have been far above average.

Famous investor Sir John Templeton would have won many a Science Fair if his following quote was his hypothesis: “Bull markets are born on pessimism, grow on skepticism, mature on optimism, annoy people on speculation and die on euphoria.”

The chart below shows the one year return in gray and the intra-year decline for that year with the red dot. Someone who invested in the S&P 500 since 1980 would have earned a 9.4% annual return, enough to double her money every ~7 years. But along the way, she would have experienced an average intra-year drop of -14% along the way.  The beauty of Sir Templeton’s “hypothesis” is that investors don’t need to know why (or predict when) we hit the next cycle of euphoria or pessimism. The blue ribbon comes from expecting and planning for both the gray bar (returns) while not being surprised by the red dot (declines.)