Dr. Hendrick Bessembinder is shattering stock pickers’ dreams like the 2nd grader who tells his classmates the truth about Santa Claus. Looking back over an 89 year period (1926-2015), the Arizona State professor found that the odds of picking winning stocks are not that appealing. In fact, investors would have a better chance at picking a losing stock than a winning stock.

I discovered Dr. Bessembinder’s research through a blog post by Wes Gray, PhD CEO of Alpha Architect who found it shocking enough to annotate the abstract with phrases like “Uggg”, “D’oh!” and “Stop the pain!” You can read through the whole academic paper here.

And the winner is…

Assuming I picked a random month over the last 89 years, and then picked a random stock, Bessembinder shows that I would have a 47.7% probability of picking a stock that would outperform the one-month Treasury (extremely low risk bond type investment) over the next month. 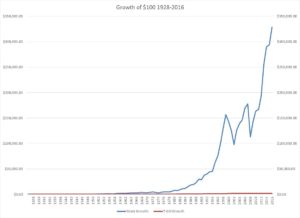 The key difference is that Bessembinder’s research centers on picking a winning individual stock rather than investing in a broad stock market index. The massive returns we see above ($328, 000 vs $1,900) are due to a handful (and I mean a handful) of stocks providing a large part of the return.

“So you’re telling me there’s a chance”

In Dumb and Dumber, Jim Carrey’s character, Lloyd Christmas, asks his love interest what the chances are of them ending up together. She’s hesitant to hurt his feeling, but when Lloyd asks her if it is one out of a hundred, she feels the need to clarify downward: “I’d say more like one out of a million,” she says, sure that it will crush him. Lloyd pauses, then famously responds: “So you’re telling me there’s a chance!”

Seen another way, while there are multiple paths which could have earned 9.5% average annual returns and turned $100 into $328,000 over nearly 90 years, there are two paths in particular that stand out to me. An investor could either:

For us, this screams the need to diversify and makes a compelling argument to having index funds be the core to an investor’s portfolio. But hey, just like Lloyd Christmas, there’s always a chance.