(Updated: In an earlier version of this post, I couldn’t recall the name of the children’s book I reference throughout. I offered a $25 reward, payable to the sleuth’s charity of choice, for anyone who could help me. In less than a day, one of our readers emailed me the title “The Creature Department”.

I happily made good on my reward and sent a donation to Alex’s Lemonade Stand Foundation for Childhood Cancer. If you have a moment, go read the inspiring story of how Alexandra “Alex” Scott was diagnosed with cancer just before her first birthday. At age 4, her humble lemonade stand raised $2,000 for cancer research. Over the remaining four short years of her life, she wrote a book, met Oprah, and along the way raised $1,000,000 for childhood cancer research. Since her death, Alex’s Lemonade Stand has gone on to raise over $150 million dollars, fund over 800 research projects, and inspire thousands. If you would like to join the effort, I encourage you to donate here.)

“It is ze pain whom I call Bernard”

A couple of years ago, our oldest daughter (maybe nine-years-old at the time) brought home a library book, “The Creature Department” by Robert Paul Weston and read aloud a now-favorite section. She thought it was funny; I thought it was eye-opening.

In the scene, a loveable “Creature” Jean-Remy (a French Fairy-Bat dressed in a fine tuxedo) explains to 12-year-old humans Elliot and Leslie about the pains of lost love:

Jean-Remy nodded, smiling at both of them. “Among ze Fairy-Bats, we are known to even give names to our troubles.”

“You name them?” asked Elliot.

“Let me give you an example. Once, a long time ago, I was in love with a beautiful fairy princess, but…” Jean-Remy sighed deeply. “Well, let us say it did not work out. Now ze fairy princess, she is gone and I am only left with a terrible heartbreak, whom I call Bernard.”

Leslie snorted. “You were in love with a fairy princess named Bernard?”

“Non non non! You misunderstand!” Jean-Remy flapped his arms (along with his wings). “I told you, ze fairy princess – she is gone. Probably I will never see her again. But ze pain! Ze pain, it is still here.” He tapped his chest with one tiny finger. “And it is ze pain whom I call Bernard.”

“And you don’t think that’s kind of weird?”

“Mais non! It is quite sensible! Now, you see, ze pain – it becomes like a companion. A strange one, perhaps, but a companion none-ze-less. Now, whenever I feel ze pain, I do not feel sad or frightened. Instead, I say, ‘Ah! Bernard, my old friend. You have come to visit me, once again, you little coquin, you!'”

Elliot and Leslie weren’t quite sure they were ready to start naming their troubles, but like a lot of things in creaturedom, the practice made an odd sort of sense.

Below, we will walk through some recent market updates, but also some timeless truths about “ze pain” of market corrections and how we think all investors should greet market risk like an old friend and companion (“A strange one, perhaps, but a companion none-ze-less”).

“Ah! Market Corrections, My Old Friend. You Have Come to Visit Me, Once Again”

While this is supposed to be a 3rd Quarter Market Commentary, most of the investing headlines have bled over into these first two weeks of the 4th Quarter. Starting September 21st, the S&P 500 has dropped roughly 6%. To put that in perspective, picture someone who has dutifully maxed out their 401k for the last two years at $18,000 per year. If they had $600,000 invested in US Stocks, they would have seen their previous two years of contributions wiped out by the recent correction. That is hard to stomach.

But as Charlie Bilello of Pension Partners points out, we have had plenty of similar market corrections over the last ten years and “They all seemed like the end of the world at the time.”

Market corrections, just like the pain of lost love, will inevitably come knocking and we have a choice of how we respond.

“Ze Pain” Outside the US and the Pain in Bonds

Over the past 30 years, U.S. equities have outperformed the rest of the world by more than 17% over a prolonged (5-month) period a handful of times.

One of those is now. pic.twitter.com/STEIPpB9dG

The chart above illustrates specific “pain” that has shown up uninvited: the pain of diversification. Particularly the pain of owning non-US assets. Only eight times in the past have we seen US Stocks outperform the Rest of the World (RoW) to this degree. This disparity is a rare occurrence, but it is enough to make diversifiers begin to doubt themselves.

We have seen a similar, but possibly less surprising, effect in the bond market. In the graphic below, you can see that for only the second time in a decade, every sector of bond funds (except the most “stock-like” high yield) is down for the year. This decline isn’t surprising; we’ve been mentioning this as a likelihood due to rising interest rates. But it doesn’t make it any more palatable. 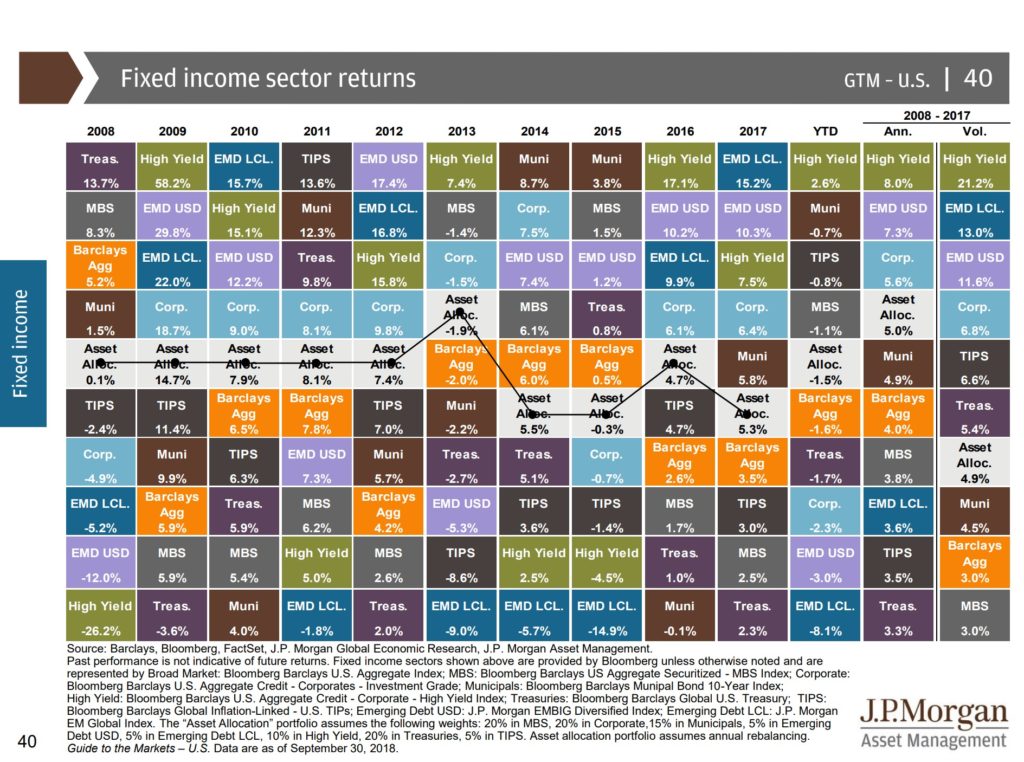 Looking across all of the major asset classes, we can see where foreign stocks and all bonds stack up in the chart below: 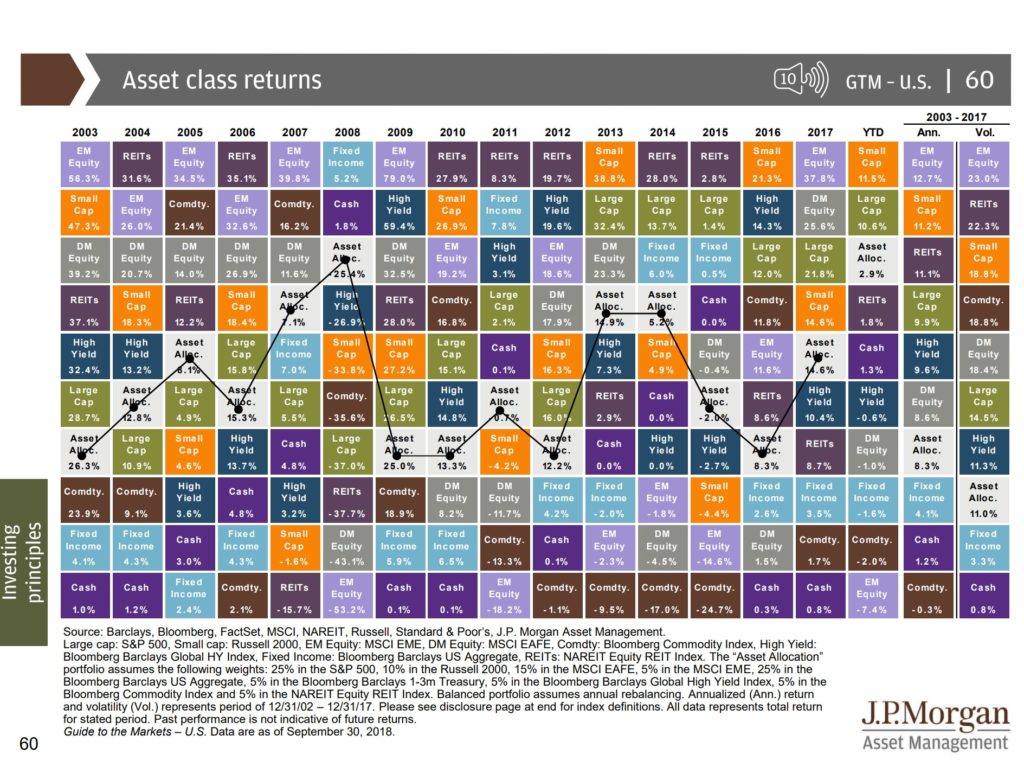 This sort of performance (along with the accompanying thoughts “well I could have told you that would happen”) can lead many investors to question the benefits of diversification.

But this questioning is exactly why we need diversification and exactly why it makes works!

Diversification Works Because Investors “Forget” That It Works

Nick Maggiulli, Of Dollars and Data, posted a great piece about “Why The Greatest Predictor of Future Stock Market Returns is Useless.” The basic premise of his post (a must read) is that even when someone is presented with a reasonable method for investing which has outperformed the market, the emotional cost of doing something different could lead to unbearable outcomes (similar to the study we mentioned, “Even God Would Get Fired as an Active Manager” in our Q2 2017 Market Commentary). 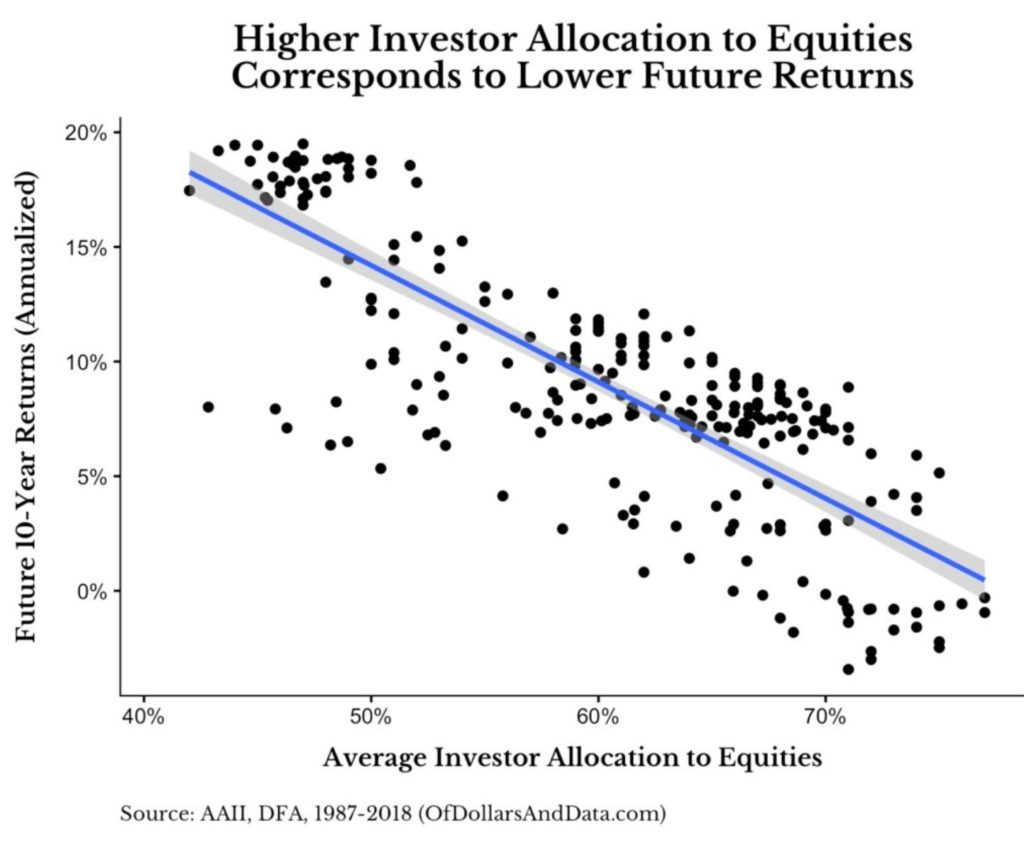 In simple terms, as more investors feel like Stocks (the US in particular) are “can’t miss” investments and they no longer see a reason to diversify, that tends to be about the time that they experience lower future returns (and diversifying would have been beneficial).

This phenomenon is nothing new. We’ve seen the same relationship in sectors (real estate and technology stocks, twice) but we’ve also seen it in reverse. As fewer investors feel comfortable allocating to an asset class, it tends to experience better than average returns. It is the same thought that Sir John Templeton had when he penned “Bull markets are born on pessimism, grown on skepticism, mature on optimism, and die on euphoria.”

“Now, Whenever I Feel Ze Pain, I Do Not Feel Sad or Frightened…”

We have two solutions to investing through market fluctuation. The first (jokingly) would be for all investors to ask their custodians, 401k providers, and financial advisors to simply “white-out” on their statement any periods of decline. The result, over time, would look something like this chart (via Michael Batnick at The Irrelevant Investor). 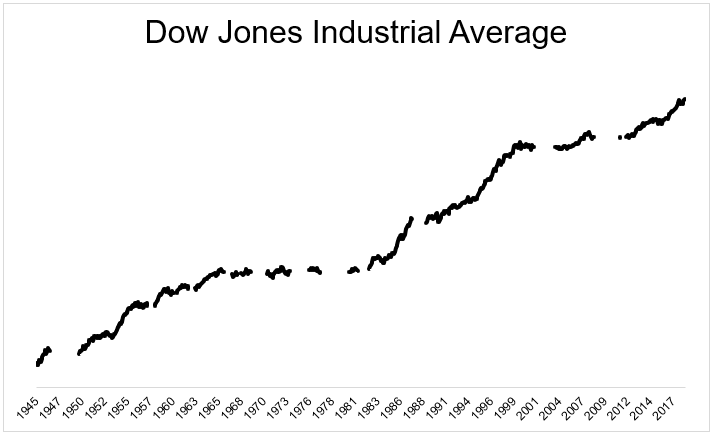 “Now, whenever I feel ze pain, I do not feel sad or frightened. Instead, I say, ‘Ah! Bernard, my old friend. You have come to visit me, once again, you little coquin, you!'”

For investors with a long time horizon ahead of them and some appetite for risk, corrections can be great opportunities to invest when no one else dares. If someone has the ability to increase savings (and decrease lifestyle need) the potential impact of compounding can be even greater (see Michael Kitces’s post about the double-edged sword of retirement savings.)

For investors on the other end of the time spectrum, they should also genuinely greet these market corrections as “old friends”…because they are. If an investor has retired with a portfolio sufficient enough to sustain their lifetime, it is likely because of market risk (corrections), not in spite of it. In other words, volatility is and has been our friend.

Hard to believe? Consider what would happen if stocks were less risky. What if they were contractually obligated to pay their owners a certain amount of money over time? That doesn’t take much imagination, because that type of “guaranteed stock” is actually called a “bond.”

In fact, without the possibility of risk, most retirees today would not be retired. For example, what if an investor started with $302,000 in 2003 and had the choice between a) a diversified asset allocation portfolio (the grey boxes in the patchwork chart above) and b) a fixed income portfolio (the blue boxes). Using JP Morgan’s return figures, the less risky Fixed Income portfolio would have only declined two years (including 2018) and would have returned 4.1% annually. The Asset Allocation portfolio would have had much larger swings (even losing ~$140,000 in 2008!) but would have ended the 15 year period with an 8.3% annualized return. So after opening 180 monthly statements, the investor who took on both the potential and the actual pain of market declines would have ~$500,000 more in her account. Talk about an “old friend” indeed.

We’ve detailed how hard it is to avoid the pain of market corrections and we don’t believe it is reasonable or healthy to simply ignore them. Rather, we should hope to recognize the pain, know its role in our plan (past, present, and future), and then say “Ah! Bernard, my old friend…”