Home » It’s More Than Money » Welcome to the Herd Mentality

In 1976 I went to work as a stockbroker. Five other brokers and I shared a bullpen, the perfect Petri dish for the Herd Mentality. Every two desks shared a stock quote machine. We were in constant earshot of each other and “dialed for dollars,” almost in unison. When one of us hit a dry spell, the others picked him up, dusted him off and put him back in the game. Our bench was thin and our experience brief, but we worked as a team and did well for our customers.

By 1983, every investor (and stockbroker) in America had been trapped in a tortuous stock market, since 1963, in which the Dow ricocheted between 700 and 960 fifteen times, seven of which I experienced.  I had been in the business for seven years when in August 1982, the Dow mounted a rally, which by April 1983 had propelled the Dow through its ceiling of 1,000 (and which marked the birth the a 20-year Bull Market). To celebrate, two of my 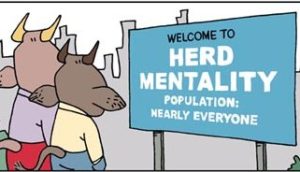 associates went right out and each bought a shiny Mercedes Benz 450SL. Each took me for a spin. Seven days later, I went out out and, from the same dealer, bought a Mercedes Benz 300SD. That’s crowd psychology in a nutshell, all around us, all the time.

But Everyone’s Doing It

Social psychologists have theories for explaining ways the psychology of a crowd differs from and interacts with that of the individuals within it. Crowd behavior is heavily influenced by the loss of responsibility of the individual and the impression of universality of behavior, both of which increase with the size of the crowd. My behavior, as part of a crowd, was different than had I been acting independent of the crowd. I felt that buying the car was the right thing to do. Luckily, three years and 60,000 miles later, I got $50 more than I paid for my Mercedes. Crowd-inspired decisions rarely yield good outcomes. When you get lucky like I did, that just makes you want to follow the crowd again.

They Don’t Call it Testosterone for Nothing

Susan Hoover, of Enterprising Investor blog, CFA Institute, illuminated the work John Coates, neuroscientist and author, in an Enterprising Investor blog post titled Irrational Decisions and the Biology of Behavioral Finance. “Coates suggests that biology played a major role in the 2008 global financial crisis. Coates found a “Jekyll and Hyde transformation” that male traders experience when under pressure. His work suggests that overly aggressive behavior, caused by elevated levels of testosterone during a bull market, leads to dangerous levels of risk in the financial system.”  You think testosterone played a part in the great Mercedes Benz buying spree of 1983?

Cortisol Made Me Do It

“Cortisol, a second hormone that Coates found to be present during times of heightened uncertainty, can delay or weaken economic recoveries. His study found that testosterone is associated with reward, noting that traders had significantly higher testosterone levels on days when they made an above-average profit. However, excessive testosterone can make traders impaired and over-confident, leading to increasingly poor decisions as their risk tolerance is affected while their skill levels remain unchanged. In the same 2010 study, Coates found that elevated cortisol levels were connected to extreme risk aversion among traders. High cortisol levels can contribute to the risk aversion and ‘irrational pessimism’ found among bankers and fund managers during financial crises, causing a paralysis that prevents them from effectively allocating risk capital.”

Sadly, some investors who didn’t need to sell their positions, sold out at the very bottom of the financial crisis.

I’ll leave with a question. If investors and fund managers don’t understand the science of risk within their brains, can they hope to manage risk successfully? Something to think about before the current economic recovery starts to cool off.